toward a better rape graphic

Posted on January 9, 2013 by thehandsomecamel 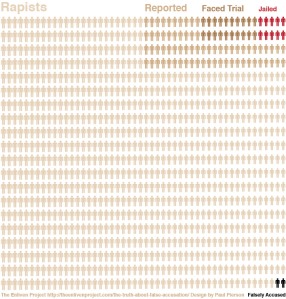 Last night I posted this graphic on Facebook. (A lot of other people did, too, I think.) It purports to tell us something about the ratio of rape to conviction for rape to false accusations. It’s a snapshot, and its primary, overwhelming purpose is to give a sense of the proportions between those three numbers.

Eric needled me something fierce about posting this graphic, because:

(a) it is really, really vague about definitions, and
(b) I’ve been pretty hard on the media about sloppy definitions when it comes to guns, so why give them a pass about rape?

I think the first point is totally valid, and you can read Eric’s objections in detail here and the objections of Amanda Marcotte at Slate here.

I also think the second point is valid as a criticism of my method. What’s sauce for the gun is sauce for the gander, and all that. On the other hand, I also think that sometimes a strong, simple graphic that gives a gut sense of things about an important topic, even if it conveys little else, can be useful. I wanted to say something about how much real rape there is, how infrequently it is punished, and how rarely men are falsely accused. In part this is because two populations I’m emotionally and intellectually invested in — Native Americans and military servicemembers — are at substantially increased risk of being raped, and those rapes are particularly likely to go uninvestigated, unprosecuted, and unpunished. So I wanted to say something simple and bold and attention-getting, and I wasn’t particularly interested in definitional precision. I wanted to confront people with general scale, not specific statistics.

That said, the graphic is sloppy. Where, for instance, does the total number of rapes come from, here? The Enliven Project, which created the graphic, explains here that estimates of the ratio of reported rapes to total rapes ranges from 5% to 50%, depending on the source. “We assumed 10%, which is dramatic, but possible.”

“Dramatic, but possible” is, of course, the kind of phrase that could be equally applied to statistics such as “One in every hundred Americans has had contact with aliens!” and “Sixty-eight percent of women reported finding Axe Body Spray irresistible!” It tells us frustratingly little about why 10% was chosen. Is it the most reasonable estimate? Or just the most “dramatic”? (As a commenter on Enliven’s own website points out, the Bureau of Justice Statistics, cited by Enliven as a primary source, estimates a 35% report rate — much higher than Enliven’s estimate.)

One can also ask whether we are all working with the same definition of rape, here. My personal feeling is that we should define the crime quite broadly. Forcible rape by a stranger, rape of an adult by an adult sibling, statutory rape, prison rape, and non-violent acquaintance rape are not all equally horrific, and that’s an important point when it comes to, e.g., sentence mitigation and enhancement. But they all stem from the same moral violation — namely, the exploitation of an imbalance of power to rob someone of autonomy over their own body, for one’s personal gratification. I also don’t have a lot of anxiety about the supposed gradations of consent — as a guy in my Crim Law class said, “If you don’t know — just ask!” Words to live by. People who don’t ask, and who proceed over resistance or objections (or even, really, lukewarm reception) are, I think, not that interested in the answer. So I’m pretty comfortable defining rape broadly and inclusively for the purpose of getting a sense of the scale of our sexual assault problem. I hope that Enliven also defines rape quite broadly. Unfortunately, I don’t know, because they don’t give us a precise definition of rape either with the graphic or on the above-linked explanatory page.

Finally, the categories given in the graphic — “rapists,” “reported,” “faced trial,” “jailed,” and “falsely accused” are also not clearly defined, and in some cases the definition can’t even be guessed at. What on earth does “faced trial” mean? Indicted? Pled down? Went to trial and later pled down? Went all the way through a trial? We don’t know. And “Jailed” is not necessarily the only satisfactory outcome to a rape trial or investigation. Some percentage of rapists may not go to prison but may be put into mental institutions, deported, or otherwise dispensed with. Those numbers aren’t reflected here. And as Marcotte points out, “rapist” is not necessarily a useful category either, since many rapists are repeat offenders. Does each “rapist” in the graphic represent a rape, or an individual rapist? If the latter, the graphic like underrepresents the total number of rapes, which makes the problem look less severe than it is.

All that being said, I still don’t really object to the graphic. For one thing, I hope it can be a starting point in an information campaign about rape. I hope it will inspire better, more precise use of data. Perhaps in the next few days somebody will knock up a new infographic that remedies these problems, and then we’ll all have something satisfying to chew on, talk about, and pass along on Facebook.

But more broadly, sometimes I don’t care if a source is technically accurate or precise on every point, if it conveys something which is generally true. Marx was wrong about history and, to some extent, economics. But he was right that there’s something inhumane and fucked-up about unbridled capitalism. Malcolm X was sometimes wrong about the law and history and, most notably, he mythologized his own life. But he was right about American racism. There’s always a danger, of course, that such sources open themselves, and thus their important ideas, to ridicule and dismissal. I think that is a serious problem. And this little infographic is in no way Das Kapital or The Autobiography, so maybe the virtue of its message doesn’t outweigh its flaws. Still. I think there’s something to this as a raw sensory impression about a serious problem that we often deny or minimize. Sometimes, to slightly paraphrase Eric, I do find value in things that are shocking solely for the sake of being shocking.

This entry was posted in Uncategorized. Bookmark the permalink.

9 Responses to toward a better rape graphic